Reinventing ourselves to deal with the crisis: the challenge of reorganizing work in Italy

In view of the unprecedented health crisis we are experiencing, the company must adapt and reinvent itself to respond to several sanitary, human and organizational challenges.
How has Manitou Group mobilized to meet these challenges? In a series of articles, we describe how the company has navigated this period and responded to overcome the difficulties.
In this second episode, we look at the Castelfranco site in Italy, where, since March, work organization has had to be adapted.

Italy was one of the first countries in Europe to suffer the full force of the sanitary crisis. In Manitou Group, the Italian subsidiary was a forerunner in implementing sanitary and work reorganization measures.

Regarding the factory, in order to maintain production, major work reorganization was implemented, thanks to mobilization and daily exchanges between the Human Resources, operational and Health, Safety & Environment (HSE) teams and the unions. An external consulting firm also participated in these discussions in order to formalize procedures.
Numerous protective regulations were introduced on the Italian site, such as the rearrangement of morning work schedules at the factory to avoid use of locker rooms and the cafeteria, mandatory wearing of masks, temperature checks for everyone on entering the building, a cleaning service for work stations and offices every two hours and at the end of the day, and general disinfection of the work environment. These measures reassured employees having to attend their workplace. 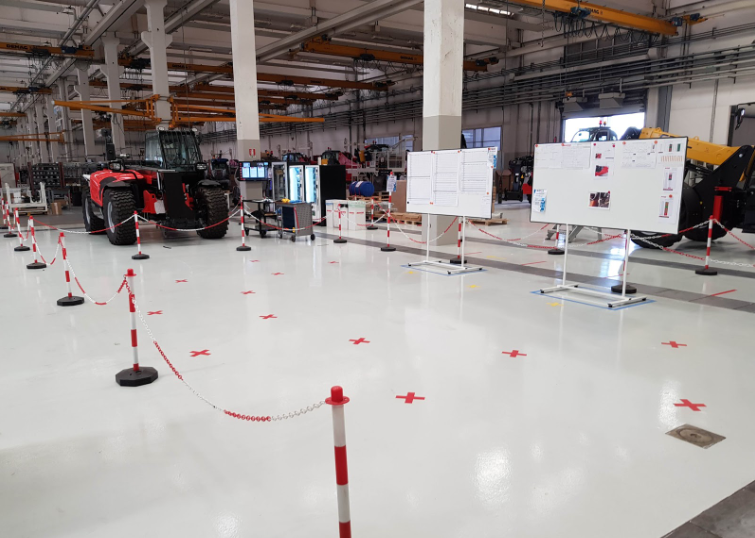 As a second step, the factory further increased its level of vigilance by dividing the various workshops and assembly lines into specific areas. Each area functions independently with regard to entrances and exits, the same as restrooms and coffee break zones.
This system will be implemented until the factory's summer shutdown date at the beginning of August. If the sanitary situation allows, a return to normal may be considered from September 2020.

What about teleworking? An unexpected and successful experience, which accelerated discussions about its longer term deployment.

Regarding the offices, teleworking, which was very rare in Italy until now, became the main way of working for 90% of employees in March and April.
In this particular context, the responsiveness of the IT teams was essential, enabling 90% of employees to telework within two days when possible.

Accelerated by this unexpected and sudden situation, this experience reveals the value of telework in the longer term. For the company, the exercise showed that this way of working is effective from an operational point of view and creates good productivity. The employees, for their part, appreciated the management's confidence in them and successfully achieved their mission to contribute remotely to maintaining the company's activity.

To reduce loss of contact with corporate reality, the link between the teams was maintained as far as possible in the circumstances, via numerous virtual meetings, frequent news communications and support from the management.
Since May 18, half of the teleworking employees have been gradually returning to the office, using a shift system within the teams to comply with the sanitary safety measures.

How will this experience be followed up? There will be an acceleration of discussions on the integration of teleworking at Manitou Italia. The process had already started before the crisis, and will now be reactivated, enhanced by the feedback from the full-scale trial of recent months.