Manitou Group has adopted an ethical charter as an expression of its values. Deployed at all levels of its organization and in all of its business activities, it was conceived as a frame of reference for Manitou Group to conduct both of its internal and external business activities with integrity, responsibility and in a socially responsible manner.

Manitou Group pays particular attention to compliance with current legislation and the actions required to comply with and adapt its activities to new regulations as well as national and international standards. Thus Manitou Group has organized itself to adapt its practices and procedures in order to comply with the French law related to transparency, fight against corruption and modernization of economic life (article 17 of the law 2016-1601, known as law Sapin) dated December 9, 2016.

Manitou Group, in addition to its internal audit department, has set up a risk and compliance department.

A working group, under the responsibility of the Compliance Vice President, has been established to implement the eight pillars described in the Sapin 2 law.

Among the measures that have been implemented:

• The working group was informed of the recommendations of the AFA (Agence Française Anti-corruption).
• The Middlenext anti-corruption code was adopted by Manitou Group, a gift and hospitality policy, an ethics committee charter and an alert procedure were deployed by the group

Code of Conduct for the Manitou Group Employees

In addition to the usual existing channels, Manitou Group has set up an outsourced alert system that allows employees and external actors to report, within the limits of what is authorized by law, any violation of the five (5) categories of ethical matters that may be the subject of a report:

- Fight against corruption;
- Anti-competitive practices;
- Conflicts of interest;
- Combating discrimination and harassment in the work environment;
- Violation of the applicable internal control rules of the Group and in particular the violation of the limits of power of attorney (PoA), and/or delegation of authority (DoA).

This system, which offers confidentiality and anonymity (when permitted by law), is available 7 days a week, 24 hours a day.

Manitou Group guarantees the protection of the whistleblower when the report is made in good faith.

Charter of the "10 Commitments for Responsible Purchasing":

Since 2015, Manitou Group has been a signatory to the United Nations Global Compact. Initiated by the UN, the initiative seeks to integrate ten universally recognized principles relating to human rights, working conditions, the environment and the fight against corruption into the company's strategy and activities. 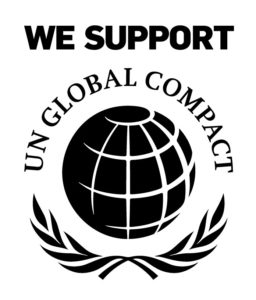